Since 1991, the Stennis Center has developed a strong working partnership with the Harry S. Truman Scholarship Foundation. Truman Scholarships are awarded to college juniors with outstanding academic achievements, leadership potential and a demonstrated desire to pursue a career in public service. Truman Scholars are the living memorial to our nation’s 33rd president.

Each summer approximately 50 Truman Scholars come to Washington for internships in federal agencies, nonprofits, and professional organizations. Despite their close proximity to Capitol Hill, many never have an opportunity to visit the U.S. Capitol or a congressional office. This program bridges that gap. Andy Rich, executive secretary of the Truman Scholarship Foundation, said, “The public service institution of most interest to Truman Scholars is the U.S. Congress. Scholars have ambitions to work there as staff and some eventually as Members. They are fascinated by the legislative process. They understand that by and large federal policy is set by the Congress, not by the executive branch.” 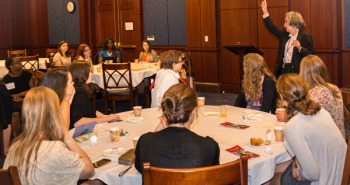 Judy Schneider, a specialist in Congress at the Congressional Research Service of the Library of Congress, talked with Truman Scholars about the legislative process.

Judy Schneider, the leading specialist on the Congress at the Congressional Research Service of the Library of Congress, taught a workshop on the legislative process. Schneider, who also is a Senior Stennis Fellow, told the Truman Scholars, “Congress is not driven by policy alone. Politics and procedure are also important.” She surprised the students when she said, “The purpose of Congress is not to pass laws, but to stop bad laws from getting passed.”
When Congress is not in session, the Truman Scholars have the unique opportunity to visit the floors of both the U.S. Senate and the U.S. House of Representatives. According to one Truman Scholar, “I loved getting to see the desks on the Senate floor. It gave me a sense of history and reminded me that Senators are human.”
After meeting Senior Stennis Fellows at lunch, the Truman Scholars went in small groups to visit the congressional offices of the Fellows. One participant remarked, “The portion of the day that I found most enjoyable and most educational was the opportunity to meet with legislative staff members. The chief of staff that I met with was very charismatic, very honest, and very direct regarding his opinions of ‘the Hill.’ He provided us with a unique perspective and fresh approach that I had not experienced before.” Another Truman Scholar summarized the day for many by saying, “I had a fantastic day. It was exciting to get a private window into the places, people and process that run Congress.” 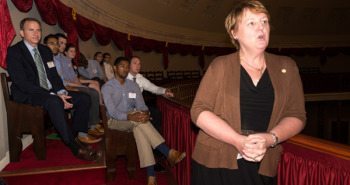 Betty Koed, Senate Historian and Director of the Senate Historical Office, took the Truman Scholars to the Old Senate Chamber in the Capitol in 2015 where she discussed the history and significance of the Senate, including the work of Harry Truman and John Stennis.

What Are Participants Saying About Program

Truman Scholar,
“Going on the Senate floor was amazing, but the most valuable experience was the small group meeting with my Stennis Fellow. Thanks …”