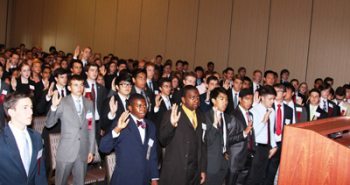 I do solemnly swear that I will support and defend the Constitution of the United States against all enemies, foreign and domestic; that I will bear true faith and allegiance to the same; that I take this obligation freely, without any mental reservation or purpose of evasion; and that I will well and faithfully discharge the duties of the office on which I am about to enter, so help me God.

At the start of each new Congress, the entire House of Representatives and one-third of the Senate take this oath of office. The same oath is administered each year to more than 600 high school students from across the country at the beginning of the annual Student Congress competition.

Since 1991, the Stennis Center has sponsored the John C. Stennis National Student Congress as part of the National Speech & Debate Association’s National Tournament. The country’s top high school debaters assemble every June to compete for the honor of the nation’s best.

The Stennis Center supports Student Congress as leadership training for public service. Rex Buffington, former Executive Director of the Stennis Center, once told the participants, “This program is a fertile training ground for talented individuals who want to use their leadership abilities to help make our communities, states, nation, and world better.”

The year 2003 marked a milestone in the competition with the retirement of Iowa debate coach Harold Keller, affectionately known as “Mr. Congress.” As the National Clerk of Congress since 1978, Keller has played a major role in planning and implementing Student Congress for 25 years. He prints and distributes legislation, organizes the chambers, supervises judging and scoring, and records and checks the results.

The late Billy Tate, then president of the National Speech and Debate Association, said at the time, “No person has done more to promote and improve the Stennis Student Congress as an event than Harold Keller.” James Copeland, the national secretary, stated, “Harold is directly responsible for the expansion of Congress to 16 Chambers, the semifinals, the National Student Congress Rule Book, the format to select champions and the upgrading of Congress awards.” The Stennis Center established the Harold Keller Public Service Leadership Award to honor this long-time leader of the Stennis Student Congress. The award that pays tribute to Keller’s long-time support recognizes an individual who has successfully applied lessons learned through Student Congress to become an effective leader in public service. It is awarded annually at the National Speech and Debate Tournament. 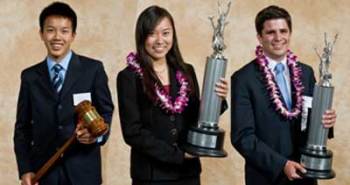 The Student Congress event impacts not only the hundreds who attend the national tournament but the thousands of students nationwide who compete for the right to attend nationals. And its legacy is lasting. Marc Adler, a former student body president at the University of Florida, said, “Student Congress taught me that in order to make progress you need to learn to respect and appreciate other people’s points of view.” He added, “It also taught me how to be a citizen and that it is my business as a citizen to know about the government that guides my country.”