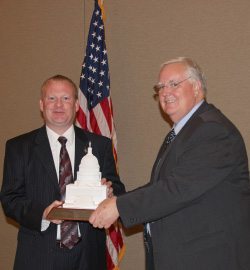 Indiana State Senator Randy Head has represented North Central Indiana since his election to the Assembly in 2008. He is chair of the Local Government Committee and also serves on the Elections, Civil Law and Judiciary Committees. During the 2013 legislative session, he authored legislation to increase the penalty for child solicitation crimes, to create school safety standards for students and to establish a system to investigate child fatalities.

Senator Head is an attorney at Tribbett Law Office in Logansport and also serves as the City Attorney. He received his Juris Doctor from Indiana University School of Law and is an alumnus of Wabash College.

Senator Head is a graduate of Perry Meridian High School, where he achieved a degree of Distinction with the National Forensic League’s honor society. At the 1987 National Congress, Head was elected outstanding representative in House 4, subsequently advancing to the Championship Session.

Senator Head was nominated by Dan Tyree and David McKenzie of Plymouth High School; Don Fortner of Munster High School; and Robert Kelly of Chesterton High School. Said Superintendent Tyree, “Randy is a friend to educators, and has shunned his own party to support educators on nearly every issue. We should celebrate Randy not only as a public servant, but one who supports public schools.”

Beyond his professional life, Head is involved in civic organizations. He is a board member and former president of the Cass County Community Foundation and serves on the Indiana State Bar Association’s Pro Bono Committee. He is also a member of the Fraternal Order of Police, Indiana Farm Bureau and Logansport Rotary Club. He lives in Logansport with his wife, Lisa.