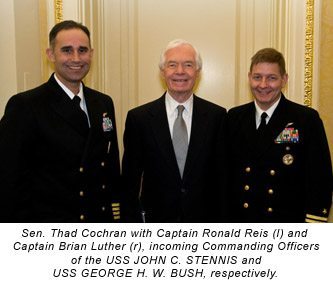 One of the programs under the Stennis Center’s ongoing initiative to improve civil-military relations is a periodic luncheon or dinner on Capitol Hill for prospective commanding officers (PCO) of the Navy’s nuclear-powered aircraft carriers. Commanding officers of America’s aircraft carriers are in a unique position to help civilian leaders better understand the life, values, and culture of the Navy, and of the military in general.

Every PCO comes to Washington for a five-week nuclear refresher course as a final step in their preparation to assume command. The Stennis Center has developed a program for these incoming commanding officers to interact with Members of Congress and senior-level congressional staff who work on national security issues and to develop mutual understanding between the civilian leaders in Congress and the main Fleet units. 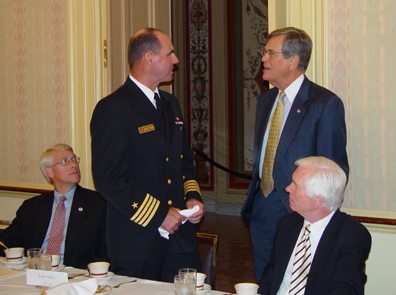 The primary purpose of the program is to provide the PCOs opportunities to understand the interests of Congress and the civilian leadership of the government and how to interact with them when their ships are visited. Since the inception of the program, the Stennis Center has hosted the prospective commanding officers of eleven aircraft carriers: the USS ENTERPRISE (CVN-65), USS NIMITZ (CVN-68), USS DWIGHT D. EISENHOWER (CVN-69), USS CARL VINSON (CVN-70), USS THEODORE ROOSEVELT (CVN-71), USS ABRAHAM LINCOLN (CVN-72), USS GEORGE WASHINGTON (CVN-73), USS JOHN C. STENNIS (CVN-74), USS HARRY S. TRUMAN (CVN-75), USS RONALD REAGAN (CVN-76), and the USS GEORGE H. W. BUSH (CVN-77).

Captain Jim Symonds, commanding officer of the USS REAGAN who attended one of the dinners, said, “This was a very valuable experience. I appreciate the Stennis Center connecting me with legislative leaders and look forward to hosting civilians on the ship.”