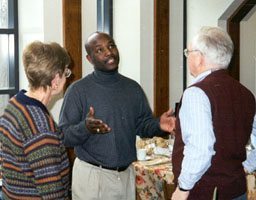 The Stennis Center and the Harry S. Truman Scholarship Foundation began their second decade of partnership by jointly participating in the inaugural Charles Murphy Ethics and Public Service Leadership Seminar at Duke University on January 12-14, 2001. The seminar was organized and hosted by the Kenan Institute for Ethics and the Terry Sanford School of Public Policy, both at Duke University.

Senator Stennis was the first chair of the Senate Ethics Committee and drafted the first code of ethics for the United States Senate. The Stennis Center’s interest in this program stems from his reputation as a model for moral leadership in politics.

Twenty-seven young adults who are active in politics gathered over a weekend to discuss what constitutes ethical and effective leadership from a moral perspective. A third of the participants were high-ranking Congressional staff who have served as Stennis Fellows. Truman Scholars made up another third, and a third were elected and appointed officials from North Carolina.

The focus of the event was moral leadership in politics. Two issues in particular received attention: (1) compromise and disagreement and (2) money and politics. Examples of ethical dilemmas which were discussed included truth versus loyalty, individual versus community, and justice versus mercy.