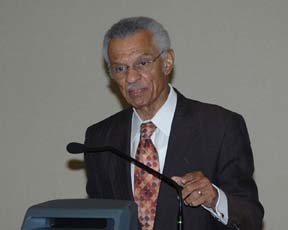 The Truman Scholars Conference on Civil Rights was held in conjunction with the Truman Scholars Association on February 4-6, 2000 at The Carter Center in Atlanta, Georgia. The purpose of this conference was to help Truman Scholars better understand the history and significance of the civil rights movement and recognize the need to continue to improve race relations in America. The keynote speaker was Reverend C.T. Vivian, a veteran of the civil rights movement who many remember as the man television cameras captured being punched in the face by Sheriff Jim Clark in Selma, Alabama in 1965. He challenged the group to work toward that unfinished business of bringing equality and reconciliation to America. In addition, the Southern Regional Council facilitated a dialogue on race among Truman Scholars. The conference also included a visit to the Martin Luther King, Jr. National Historic Site, which includes his birthplace, his gravesite and a museum on his life. Truman Scholars concluded their weekend by attending a worship service at Ebenezer Baptist Church, where King, his father and his grandfather were pastors. The Stennis Center has enjoyed its association with Truman Scholars and looks forward to future opportunities to help these talented young leaders accomplish their public service career goals.