Mississippi State University (MSU) Stennis-Montgomery Association (SMA) students recently visited Washington, D.C., to learn more about public service career opportunities and leadership on Capitol Hill. The SMA is a student organization at MSU that encourages students from different backgrounds and academic disciplines to participate in politics. It serves as a resource for students who want to register to vote and immerse themselves in the political process of their community and nation. Throughout the year, the SMA sponsors speakers on campus and provides workshops that guide students through the application process for internship positions in Washington, D.C., and across the United States. Each year, approximately 30 of the most active SMA members travel in March to our nation’s capital.

Officers at the Marine Barracks Washington, D.C., also known as “8th and I,” discussed leadership qualities and values with members of Mississippi State University’s Stennis-Montgomery Association in Washington, D.C., March 11, 2019. 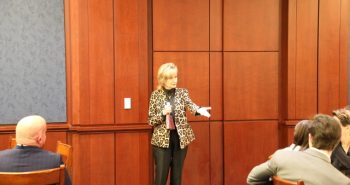