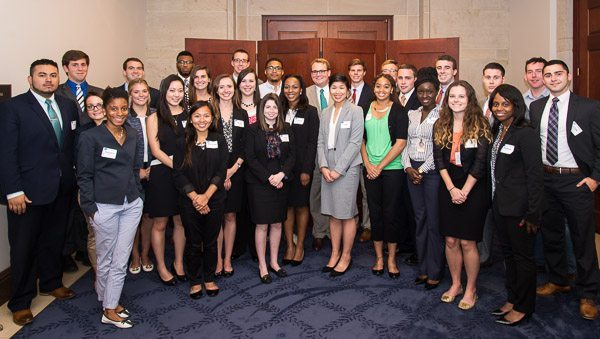 The Stennis Program for Congressional Interns is a competitive, bipartisan, bicameral program designed to provide congressional summer interns with a unique opportunity to gain a better understanding of the operation of the Congress and an appreciation for the institutional role it plays in our democracy.

Participants will meet with senior congressional staff and other interns from throughout the country in a series of weekly discussion sessions that explore various aspects of the workings of Congress and how it interacts with other institutions in Washington.

Topics explored in the summer of 2019 may include:

How our laws are REALLY made – a detailed workshop on the legislative process;
Committee, Personal and Leadership offices – a look at the differences among these offices and how they cooperate with each other;
Congress and the other branches – an overview of how Congress interacts with the White House, federal agencies and the courts;
The role of the media and lobbyists – discussion of the ways in which lobbyists, the media and money influence the legislative process;
The House and Senate floor – a close-up look at how each chamber is organized and how it conducts legislative business, including a tour of each chamber;
Careers on Capitol Hill – a discussion with senior congressional staff about career paths and the work environment on Capitol Hill;
Roundtable Discussion with Senior Stennis Fellows – small group meetings with longtime staff members.

These 90-minute to 2-hour discussion sessions feature a presentation by a small panel of experts followed by a discussion among the interns and panelists.

At the conclusion of the program, participants are presented with a certificate of recognition and hear from a Member of Congress. In previous years, interns have listened to Rep. Mike McIntyre (NC), pictured at right, describe his personal journey from intern to election as a Member of Congress.

Approximately 30 interns serving in a Member or Committee office will be selected for this six-week program. Participants must be nominated by their office and have completed at least two years of college and are selected from the various offices based on their academic record, involvement in campus and community activities, and a desire to explore a public service career.

Interns who have completed the program rated the experience very highly. They identified the opportunities to interact with senior staff and getting to build relationships with other interns as the greatest benefits. “I’ve learned so much more about the dynamics of life on Capitol Hill,” one intern said. “I have also met many other great interns who are just like me – ambitious and driven, yet open to new ideas and ready to learn. I would not trade this experience for anything.”

This program is conducted by Senior Stennis Congressional Staff Fellows, a group of congressional staff who have completed a two-year leadership development program for senior staff. Following their fellowship, many Senior Fellows continue to serve in personal, committee, and leadership offices in the House and Senate, while others are in senior positions in the Executive Branch and private sector. They remain committed to addressing the challenges facing Congress as an institution of American democracy. Senior Stennis Fellows are critical resources for participants in the Stennis Program for Congressional Interns.

If you have questions about the program please contact:
Eric Jones
Phone: (202) 546-1837
Email: eric@stennis.gov