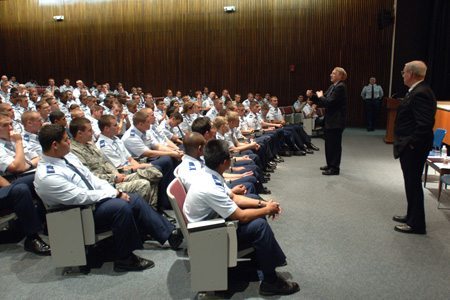 Thousands of students on college campuses throughout the country are getting a rare opportunity to interact with former Members of Congress through a program designed to attract young people to public service. Concerns about the lack of civic literacy among America’s young people and declining participation in politics and voting even among college-educated young adults are being addressed by the Congress to Campus program, which brings students into contact with former Members who share their insights and experiences. Students are challenged to become involved in the legislative process and learn about the value of public service from men and women who have served in Congress.

The United States Association of Former Members of Congress (FMC) created the Congress to Campus Program in an effort to improve college students’ understanding of Congress and the American government and to encourage them to consider careers in public service. Since 1996, the Stennis Center for Public Service has partnered with FMC to assist in managing the program. Participating campuses also contribute to the program by arranging interactive sessions with students, paying a fee on a sliding scale, and absorbing all on-campus expenses related to the program. The program sends bipartisan pairs of former Members of Congress – one Democrat and one Republican – to visit college, university and community college campuses around the country. Over the course of two days, the former Members conduct classes, hold forums, meet informally with students and faculty, and do interviews and talk show appearances with local press and media.

The Congress to Campus program provides a distinctive, powerful and personal means to educate the next generation about American government, politics and public affairs. The former Members provide students with insights into the realities of American democracy through sharing their real-life experiences as candidates and officeholders. The former Members also deliver an important message about bipartisan cooperation.

Former Members share their real-life experiences of both achievement and occasional frustration, bringing to life for their young audiences the theory and the practice of democracy, and explaining the often misunderstood ways of Congress and Washington, D.C. They present a living, bipartisan demonstration of what ought to typify our representative democracy: decent people with different points of view, who are able to discuss constructive ways to work through differences to solve public problems.