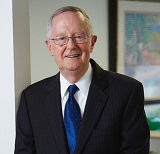 Tom Daffron has held a wide variety of senior management positions in both government and the private sector, including chief operating officer of the Jefferson Consulting Group, a mid-sized Washington government consulting firm, where he oversaw the administrative and financial functions as well as the day-to-day operations of the firm from 2006 until 2016.

Immediately prior to his appointment at Jefferson, he was Chief of Staff to Senator Lisa Murkowski of Alaska. Earlier, he was Chief of Staff to two other Senators, Fred Thompson of Tennessee and William Cohen of Maine, and a speechwriter for Senator Charles Percy of Illinois. In 1999, he was the National Campaign Manager for the presidential campaign of Elizabeth Dole, the first woman to mount a serious effort to win a major party presidential nomination.

At the end of the Dole campaign and prior to his return to Capitol Hill, Mr. Daffron became Executive Vice President of Chesapeake Enterprises, a government relations consulting firm in Washington. Earlier in his career, he was a newspaper reporter and editorial writer, a University public relations executive, a Government Relations Director for a major corporation, and Senior Vice President and Chief Operating Officer for the Baltimore Orioles.

Since the early 1970s, he has managed or consulted in a variety of state and federal political campaigns, including those of Senators Thompson, Cohen and Percy, as well as Senator Susan Collins of Maine.

He has served in the Peace Corps and was selected for an American Political Science Association Congressional Fellowship, which brought him to Washington. Mr. Daffron was also a member of the Stennis Center’s Stennis Congressional Staff Fellows Program in the 105th Congress, which is a practical, bipartisan leadership development experience for senior-level staff of the United States Congress.

Mr. Daffron holds a master’s degree from Columbia University and an undergraduate degree from Brown University. During the fall semester of 2016, he taught a political science course at the University of Maine.

Mr. Daffron now resides in Bangor, Maine. He is a member of the board of directors of Spurwink Services, a behavioral health and education provider in Portland, Maine, and a trustee of St. Joseph Hospital, in Bangor.