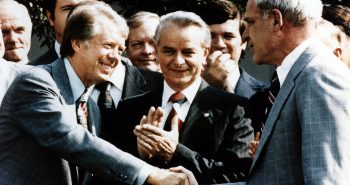 Our 39th President, Jimmy Carter, turned 95 in October 2019, making him the longest-lived former President in our nation’s history. It seems fitting to reflect on some of the unique and distinctive aspects of his life and his career in public service, which included serving his country in uniform in the Navy, serving as Governor of Georgia, as President of the United States as well as an extensive post-Presidential career serving humanitarian causes, primarily through his work at the Carter Center.

Jimmy Carter is one of three Presidents who graduated from a U.S. military academy, but the only one to have graduated from the Naval Academy, which he did in 1946. He is one of three Presidents who served in the Navy and one of six who served in the Navy or Naval Reserve – all in the 20th century. At the time of his inauguration, he was the fifth consecutive President with naval active or reserve service. Although a promising Navy career lay before him as he was in on the ground floor of the creation of the nuclear submarine force, when his father died in 1953, he felt he had to resign to go back to Georgia to take over the family business.

While a number of U.S. Navy ships have been named for U.S. Presidents, Jimmy Carter is unique in having an attack submarine named after him, the USS Jimmy Carter (SSN-23). It might seem like a slight that he does not have an aircraft carrier named in his honor since eight of our nuclear carriers are named for former Presidents (that number will grow to nine in 2020). But the naming of a Seawolf-class attack submarine after President Carter is in recognition of his service as a submariner in the Cold War era under the legendary “Father of the Nuclear Navy” Hyman Rickover.

Besides our aircraft carriers and the Jimmy Carter, the only other Navy ship in service named after a former President is the USS Roosevelt (DDG-80), a destroyer named after Franklin Roosevelt, who did not serve in the Navy but who was Assistant Secretary of the Navy (the position now known as Under Secretary of the Navy) during World War I. However, prior to the current Ohio class, 11 ballistic missile submarines were named after former Presidents. None of the current Ohio class ships are so named, however (all but one are named for states).

An interesting connection between the Stennis Center for Public Service and President Carter is that during Carter’s Presidency, when the Shah of Iran’s regime fell, Senator Stennis persuaded President Carter to complete the work on four destroyers then under construction for Iran, rather than scrap them because they could no longer be sold to Iran, as they could be purchased by the Navy with significant savings to the taxpayers. Those four destroyers became the KIDD class (DDG993-DDG996) and were part of the U.S. Naval fleet during the 1980s and 1990s.

Jimmy Carter is one of four U.S. Presidents to win the Nobel Peace Prize, but the only one whose selection was based in part on his deeds outside of his Presidency. His citation for his award in 2002 stated that it was “for his decades of untiring effort to find peaceful solutions to international conflicts, to advance democracy and human rights, and to promote economic and social development.”

Despite his own military service, as President, Carter was not considered particularly pro-military, especially compared to his successor Ronald Reagan who presided over significant increases in military budgets and pay. He served as President at a difficult time, taking office shortly after the unsatisfactory end of the Vietnam War and ending with the failed “Desert One” hostage rescue mission in Iran. His decision to pardon Vietnam War draft evaders was controversial, as were the Panama Canal treaties he negotiated to give control of the canal to the Panamanian people. Most Americans alive today are too young to remember how difficult and divisive the Panama Canal treaty issue was 40 years ago.

The All-Volunteer Force was still a work in progress during his Presidency, and relations with the Soviet Union were tense, in particular after the Soviets invaded Afghanistan in 1979, leading to President Carter’s decision to have the United States boycott the 1980 Olympic Games in Moscow and his enunciation of the Carter Doctrine regarding U.S. interests in the Persian Gulf region, which led to the creation of the U.S. Central Command.

What really distinguishes Jimmy Carter is his long post-Presidential body of work in service to others. Many people are aware of his extensive work with Habitat for Humanity. He has also taught at both colleges and Sunday school. It has become common for Presidents to set up foundations to continue working on issues they care about after their time in office ends. But the Carter Center was one of the first and remains among the most active. Former President Carter and his team at the Carter Center have served as neutral election observers to guarantee fairness in over 100 elections around the world; helped to establish village-based health care delivery in thousands of communities in Africa; worked to establish human rights standards; and sought to resolve conflicts around the world.

Jimmy and Rosalynn Carter have been married for over 70 years now. Rosalynn began her married life as a Navy spouse and later became the first lady of Georgia and then of the nation. She has been a strong proponent of mental health issues, of the Equal Rights Amendment, and as co-founder of the Carter Center has worked on local and global issues such as housing and the Middle East. Rosalynn Carter was the 2001 recipient of the Lindy Boggs Award presented at the Stennis Center’s Southern Women in Public Service conference.