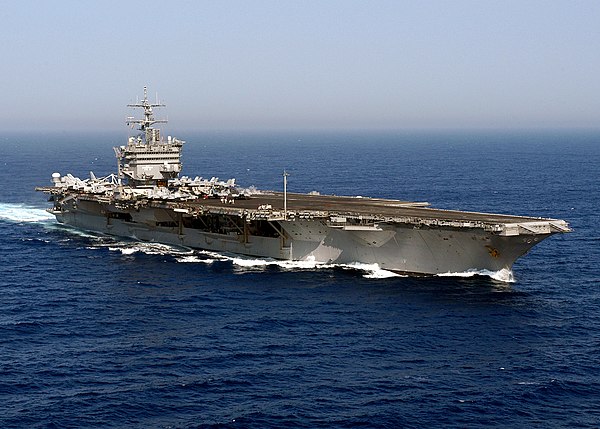 ENTERPRISE is a storied name in American military history, proudly borne by ships in service of the United States since the Revolutionary War. The eighth ship to bear the name, the USS ENTERPRISE (CVN-65) aircraft carrier, was a part of the Stennis Center’s leadership awards program until her decommissioning in 2017. The ninth ship to carry the name, the USS ENTERPRISE (CVN-80), is scheduled for completion in 2027.

The Stennis Center’s partnership with the USS ENTERPRISE began in 2000 when the ship was under the command of Adm. James A. “Sandy” Winnefeld (USN, RET), who later served in many key national defense leadership positions, including vice chairman of the joint chiefs of staff. As the ship was returning home from a six-month deployment to the Persian Gulf on September 11, 2001, news broke of the attacks on the World Trade Center in New York, the Pentagon in Washington, D.C., and the hijacking of United Airlines Flight 93, which crashed over Pennsylvania. Without waiting for orders, then-Capt. Winnefeld immediately turned the ship around to be in position to launch the first air attacks against Al-Qaeda off the coast of Afghanistan days later.

That action is consistent with the heroic service of CVN-65 and the previous seven ships to carry the ENTERPRISE name – all affectionately known by the nickname “Big E.” When the USS ENTERPRISE Leadership Awards for outstanding leaders on the USS ENTERPRISE were established, each award was named after an exceptional leader who served America on an ENTERPRISE-named ship:

The Admiral James L. Holloway III Leadership Award was presented to an outstanding senior officer. Adm. James L. Holloway III was the third commanding officer of the USS ENTERPRISE (CVN-65), serving from July 1965 through July 1967. His 39 years of service on active duty in the U.S. Navy encompassed combat in three wars and culminated in service as the 20th chief of naval operations from 1974-1978. Adm. Holloway participated in the Washington, D.C., program for ENTERPRISE leadership award winners every year until his health prevented it. He died in November 2019.

The Stephen Decatur Leadership Award was presented to an outstanding junior officer. Under Lt. Stephen Decatur’s command, the third ENTERPRISE (a small, 12-gun clipper schooner) was deployed to the Mediterranean in 1801 as the smallest member of a four-ship squadron assigned to protect commerce from the Barbary States of Morocco, Algiers, Tunis, and Tripoli. Tiny ENTERPRISE handed the Barbary pirates their first defeat against the better-armed ship, TRIPOLI. Lt. Decatur “repeatedly raked his opponent, and, without losing a man, finally forced her surrender with 50 of her crew of 84 killed or wounded.” On October 31, 1803, the PHILIDELPHIA, a 36-gun frigate, ran aground on an uncharted shoal while pursuing a small craft in Tripoli Harbor. Surrounded by gunboats, it surrendered, and the Tripolitans later salvaged her on a flood tide. On the evening of February 16, 1804, Lt. Decatur embarked in a captured 60-foot Maltese ketch, renamed her INTREPID, and manned her with a hand-picked crew of 83, including 75 ENTERPRISE sailors. Hiding the crew below decks, he navigated into Tripoli Harbor with a Maltese pilot’s assistance and approached the PHILADELPHIA. The pilot explained they had lost their anchor in a storm and requested permission to moor alongside. “Each of the boarders knew his part well, and within 20 minutes, their firebrands had PHILADELPHIA blazing from stem to stern.” Evading shots from shore batteries and gunboats, Lt. Decatur’s crew rowed out of the harbor and proceeded to report the destruction. “The business being so well planned, not a man was killed or wounded on our side. The Tripolitans had 20 killed; the others made their escape by jumping overboard after the ship was afire.” This was labeled the “most daring act of the age” by the British Lord Nelson.

The Chief G. F. Lawhon Leadership Award was presented to an outstanding chief petty officer. On January 16, 1942, just a little more than a month after Pearl Harbor, the seventh USS ENTERPRISE (CV-6) was steaming in the Pacific Ocean on her way to support the reinforcement of Somoa in the early days of our nation’s participation in World War II. An SBD Dauntless, the workhorse bomber of the Battle of Midway, landed on her flight deck. “The landing Dauntless tore loose an arresting wire and plunged off the deck edge into the catwalk. Sadly, the bomber’s left wheel struck a chief petty officer in the head, and he died later that day. The chief petty officer’s name was G. F. Lawhon, an Aviation Machinist’s Mate who had put the ship in commission in 1938. He was one of the solid, experienced key men who hold a ship together and make it work. Chief Lawhon had devised the first system for recovering the tow strap from a catapulted plane as it becomes airborne, and he had helped perfect the precisely stressed shearing pins in the flight deck barriers on those older carriers, which did not have angled flight decks.” Chief Lawhon’s death was the first of World War II on the USS ENTERPRISE (CV-6).

aThe Billy Hawk Leading Petty Officer Award was presented to an outstanding first class petty officer, also designated as the ENTERPRISE Sailor of the Year. Many ENTERPRISE heroes emerged on January 14, 1969, when a Zuni rocket’s sudden detonation on the flight deck killed 28 and injured 343 men. One of these heroes was Flight Deck LPO Billy Hawk. After the detonation, fuel poured from the aircraft, causing a towering fury of fire and heat that detonated more weapons. Manned hose teams were the only defense available on the ENTERPRISE at that time. In all, 18 weapons detonated, blowing eight holes in the flight deck and damaging or destroying 35 aircraft. Petty Officer Hawk led a group of men to remove three aircraft from Elevator #3, creating a firebreak and preventing the spread of fire to the island. Billy Hawk then proceeded to extinguish fires on Elevator #4.

The Boatswain’s Mate Second Class George H. Smith Leadership Award was presented to an outstanding junior petty officer (E-4 or E-5), also designated as the ENTERPRISE Junior Sailor of the Year. Boatswain’s Mate Second Class George H. Smith manned a machine gun in the port catwalk on the afternoon of February 1, 1942, as USS ENTERPRISE (CV-6) concluded a successful engagement against the enemy in the South Pacific. She recovered her aircraft and steamed at 30 knots to Pearl Harbor, her homeport. Suddenly five twin-engine Japanese bombers in an open V broke out of the low clouds on the starboard bow and attacked in a shallow glide. One bomb burst about 30 feet off the port quarter. Fragments tore into the ship, cutting a gasoline line, igniting the spilled fuel, and shattering Petty Officer Smith’s leg. Smith continued to fire until the action was over, and his shipmates hauled him off to sickbay. He died there two hours later, the first combat casualty in the ENTERPRISE.

The Lieutenant Richard H. Best Award was presented to an outstanding airman, seaman, or fireman, also designated as ENTERPRISE Bluejacket of the Year. Lt. Richard H. Best commanded the (VB-6) BLACK RAMS, who flew Dauntless bombers from the USS ENTERPRISE (CV-6) during the Battle of Midway (June 4-6, 1942). He can be appreciated for his physical courage, as well as modesty and respect for his teammates. He led the attack against the AKAGI, the battle group’s lead carrier, flying over her flight deck at 1,800 feet. “I pulled out and rolled over so close to that ship that the Japanese could have thrown a monkey wrench at me.” The BLACK RAMS payload ignited loaded enemy planes, as well as bombs and torpedoes left topside, creating a “hell’s casserole.” Ever-modest, Best credits torpedo plane crews from other squadrons, particularly those embarked on USS HORNET, for bringing down the Japanese fighter cover and clearing the way for the dive bombers, sacrificing their lives in the process. Best also praised his commanders for providing inspiration and motivation essential to mission accomplishment. In particular, he credited Adm. Halsey with ensuring his battlegroup engaged the enemy “viciously and vigorously” by growing a “‘Get them’ attitude in the ENTERPRISE crew” from the lowest E-1 to the captain. Lt. Best’s physical courage at Midway cost him his naval career. A soured supply of oxygen burned his lungs during his final run, requiring him to dive to a breathable altitude. Promoted to lieutenant commander, he was discharged from the naval service by the end of the year.

It was the Stennis Center’s honor to present these prestigious awards to deserving USS ENTERPRISE leaders annually until the decommissioning of ENTERPRISE in 2017. As part of the annual leadership awards program, the recipients and spouses joined their commanding officer for a Washington, D.C., program. The program brought them together with civilian leaders – members of Congress, senior-level congressional staff, and others – to learn about the policy-making process. It also allowed members of Congress and senior staff to see first-hand the quality, character, and commitment of the men and women serving our nation in the military. Participation of spouses in the program made the program more meaningful for the recipients and demonstrated for leaders on Capitol Hill the family commitment that military service demands.

An added element of the D.C. program for the ENTERPRISE awardees was the opportunity to meet with Adm. James L. Holloway III, the storied naval leader who had commanded their ship during the Vietnam War. Adm. Holloway met with every group of ENTERPRISE leadership award winners at the National Museum of the United States Navy on the Washington Navy Yard grounds, providing stories and inspiration that added significantly to the meaning of their experience.

The Stennis Center looks forward to re-instituting the leadership awards partnership with the new USS ENTERPRISE when it is commissioned toward the end of this decade.

Click on the photos below to see USS Enterprise awardees throughout the years.